Augmented reality is a very buzzy space, but the fundamental technologies underpinning it are pushing boundaries across a lot of other verticals. Tech like machine learning, object recognition and visual mapping tech are the pillars of plenty of new ventures, enabling there to be companies that thrive in the overlap.

Phiar (pronounced fire) is building an augmented reality navigation app for drivers, but the same tech it’s built to help drivers easily pinpoint where they need to make their next turn also helps them build up rich mapping data that can give partners like autonomous car startups the high-quality data they so deeply need. 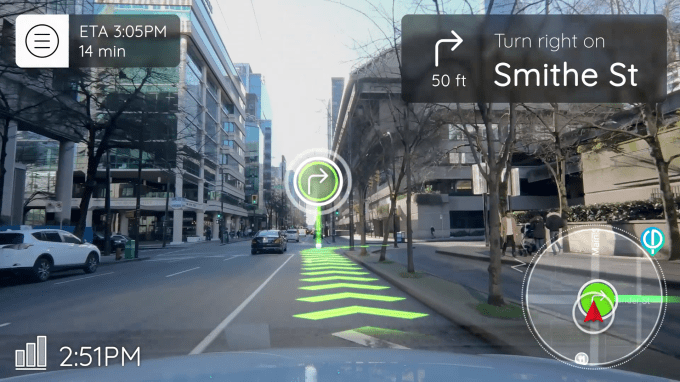 While phone and headset-based AR have received a lot of the broader media attention, the automotive industry is a central focus for a lot of augmented reality startups attracted by the proposition of a mobile environment that can showcase and integrate bulky tech. There have certainly been quite a few heads-up display startups looking to take advantage of a car’s windshield real estate, and prior to joining Y Combinator, Phiar was actually looking to build some of this hardware themselves before deciding on a more software-focused route for the company.

Unlike a lot of phone AR apps built on top of Apple or Google’s developers platforms, Phiar’s use case doesn’t quite work with the limitations of these systems which understandably weren’t built with the idea a user would be moving at 60 miles per hour. As a result the company has had to build tech to greater understand the geometry of a quickly updating world through a single camera while ensuring that it’s not just some ugly directional overlay, using techniques like real-time occlusion to ensure that the digital and physical worlds interact nicely.

While the startup’s big consumer-facing play is the free AR mobile app, Phiar is really just an augmented reality company on the surface, its real sell is what it can do with the data and insights gathered from an always-on dash camera. The same object recognition tech that will allow the app to seamlessly toss AR animations onto the scene in front of you is also analyzing that environment and uploading metadata to build up its mapping insights.

In addition, the app saves up to 30 minutes of footage from each ride, offering users the utility of a free dash cam in case they get in an accident and need video for an insurance claim, while providing some rich anonymized data for the company to build up high quality mapping data it can sell to partners.

This kind of data is incredibly useful to companies building autonomous car tech, ride sharing companies and a lot of entities that are interested in access to quickly-updating map data. The challenge for Phiar will be building up enough users so that their map data is as rich as their partners will demand.

CEO Chen-Ping Yu says that the startup is in talks with partners in the automative space to integrate their tech and is also working to bring what they’ve built to companies in the ride-sharing space. Yu says the company plans to release their consumer app in mid-2019.