A recent user survey sent out by Dropbox confirms the company is considering the addition of an electronic signature feature to its Dropbox Professional product, which it refers to simply as “E-Signature from Dropbox.” The point of the survey is to solicit feedback about how likely users are to use such a product, how often, and if they believe it would add value to the Dropbox experience, among other things.

While a survey alone doesn’t confirm the feature is in the works, it does indicate how Dropbox is thinking about its professional product.

According to the company’s description of E-Signature, the feature would offer “a simple, intuitive electronic signature experience for you and your clients” where documents could be sent to others to sign in “just a few clicks.” 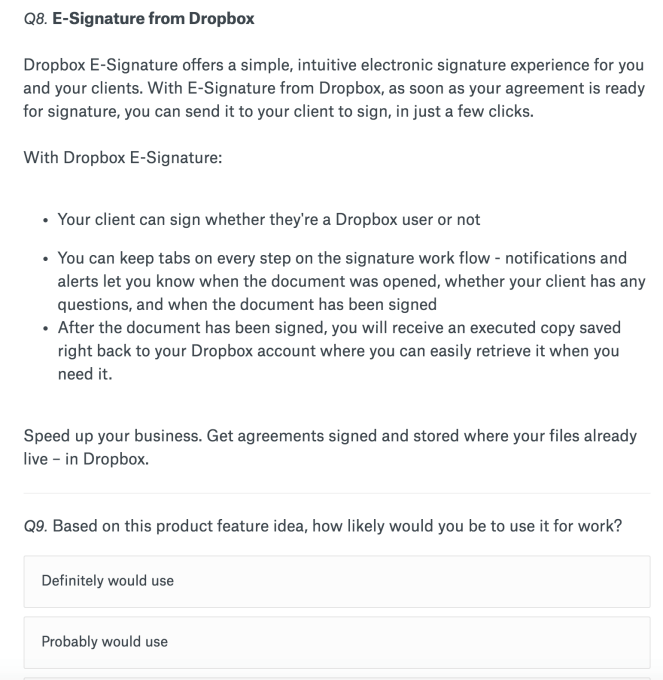 The clients also wouldn’t have to be Dropbox users to sign, the survey notes. And the product would offer updates on every step of the signature workflow, including notifications and alerts about the document being opened, whether the client had questions, and when the document was signed. After the signed document is returned, the user would receive the executed copy saved right in their Dropbox account for easy access, the company says.

In addition to soliciting general feedback about the product, Dropbox also asked survey respondents about their usage of other e-signature brands, like Adobe e-Sign, DocuSign, HelloSign, and PandaDoc, as well as their usage other more traditional methods, like in-person signing and documents sent over mail. 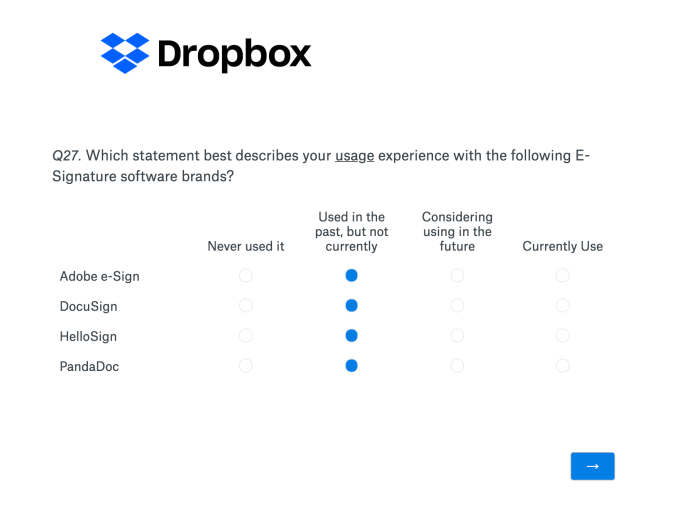 Given the numerous choices on the market today, it’s unclear if Dropbox will choose to move forward and launch such a product. However, if it did, the benefit of having its own E-Signature service would be its ability to be more tightly integrated into Dropbox’s overall product experience. It could also push more business users to upgrade from a basic consumer account to the Professional tier.

This kind of direct integration would make sense in the context of Dropbox’s business workflows. If, for instance, a company is working on a contract workflow, being able to move to the signature phase without changing context (or to share with a user who doesn’t use Dropbox) could add tremendous value over and above simply storing the document.

Companies like Dropbox have been looking for ways to move beyond pure storage to give customers the ability to collaborate and share that content, particularly without forcing them to leave the application to complete a job. This ability to do work without task switching is something that Dropbox has been working on with Dropbox Paper.

While it remains to be seen how they would implement such a solution, it might be a case where it would make more sense to partner with existing vendors or buy a smaller player than it would be build such functionality from scratch — although it’s not clear from a simple survey what their ultimate goal would be at this point.

Dropbox has not yet responded to requests for comment.