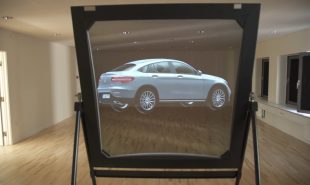 Despite AR and VR headsets being an attractive display option for many companies, some are more interested in an inclusive offerings rather than the single experience headset variant. Denmark-based Realfiction has created DeepFrame, a 64-inch screen that operates the same way as such a headset. DeepFrame is a revolutionary mixed-reality (MR) display that blends the physical and digital elements in real-time. It allows spectators to collectively experience lifelike animations in any size and at any distance without the use of special glasses.

DeepFrame is capable of projecting large-scale holograms thanks to a curved video screen that deflects interactive 3D images in 4K resolution onto a glass optic. This magnifies the image giving the illusion of three dimensions rather than just two. The technology could be used in a number of applications such as museums, amusement parks and retail outlets.

We have seen how virtual reality has been adopted in a multitude of ways, such as a performance piece incorporating dance and VR to create a unique display, or being used to honour the dead. How could you use MR in your business?