The company won the « Best of Show » award for its reflective screens. 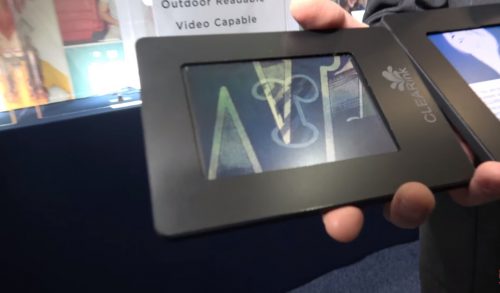 CLEARink Displays’ tech works on the principle of Total Internal Reflection (TIR) which occurs on the top plane of the display where light is reflected back creating white state images.

The top plane also encompasses an electrophoretic mechanism where applying a charge causes black particles to rise to the top and absorb light, thus creating the black state, and all this is driven by the back of the display, which is a TFT backplane essentially identical to what is used in E-ink screens and LCDs.

The CLEARink demos are running video at 30 frames per second. The company said that they are targeting wearables, mobile devices, electronic shelf labels as well as signage.

CLEARink is in trial production in a LCD fab and will have samples ready for the customer in the next few months with mass production in the first quarter of 2018.

I suggest that you take the claims of « first ever » with a grain of salt.

And of course Qualcomm’s Mirasol and Pixtronix each had reflective screen tech. Their screens were based on very different tech from CLEARink, but the screen tech was low-power and reflective, and Mirasol could display video.

So CLEARink is not the first, but it does have at least one advantage over Mirasol and Pixtronix: CLEARink is still around, and it’s about to bring a product to market.

You just finished reading CLEARink Wins Best in Show at DisplayWeek 2017 for its Reflective Displays which was published on The Digital Reader.

Source: <a href="CLEARink Wins Best in Show at DisplayWeek 2017 for its Reflective Displays« >TheOldReader