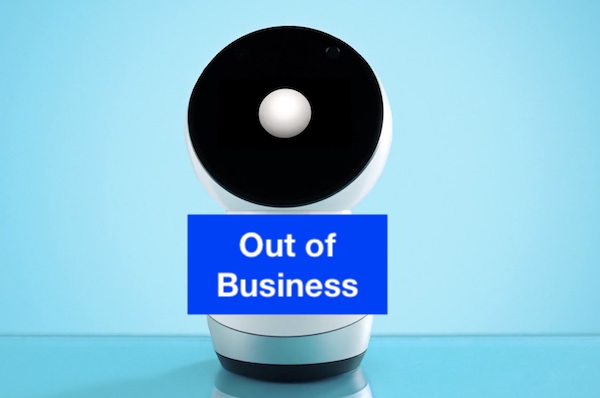 Jibo was one of the best funded and most publicized social robots around. Despite that, it appears the company and robot are no more. An investment management firm in New York purchased the assets on June 20, 2018. According to The Robot Report:

“Social robot maker Jibo has sold its IP assets. According to a former Jibo executive with direct knowledge of the situation, New York-based investment management firm SQN Venture Partners is the new owner.”

Around that same time in June, BostInno reported that Jibo’s California office was marked as permanently closed and layoffs at the Boston Headquarters were “significant.” Co-founded in 2012 by MIT’s Cynthia Breazeal, the company raised $61 million from more than a dozen different investors including blue-chip VC firm Charles River Ventures. Jibo was valued at $200 million and had 95 employees as late as November 2016 according to Pitchbook.

The robot finally came to market in October 2017 but apparently did not establish enough momentum or favorable user reviews to overcome its $899 price point. It also apparently was delayed so much that Indigogo required the company to refund over $3 million in pre-orders before the robot came to market. MediaPost’s Chuck Martin summed up the situation succinctly last week saying:

“The closure comes as no surprise since the company laid off much of its workforce in June…In July, another social robot named Kuri was shut down. That device was from the Bosch Startup Platform and was an award winner launched at CES 2017. Social and home robots are getting better as robot makers continue their quest to create a robot that consumers not only want but also will pay for.”

It Couldn’t Do Much More Than a Headless Robot, i.e. A Smart Speaker

There were many aspects of Jibo’s personality that made it unique. Its physical world interaction was compelling, but design doesn’t always win. Sometimes great design can’t overcome a high price point, limited utility, and consumers not quite sure why they need the product. While Jibo was trying to find its way, the founder’s vision was being realized in a less sophisticated way by headless robots, also known as smart speakers. For $899, Jibo could tell you the news and weather, set a timer, and play music or tell you a joke all in response to natural language interaction. For less than $30 this week, Amazon Echo Dot and Google Home Mini can perform those tasks and much more.

Smart speakers have brought voice accessible media, information, entertainment, and other utilities into the home for a nominal cost and you don’t have to worry about the devices accidentally rolling down the stairs. In some ways, smart speakers are paving the way for social robots by training consumers in new behaviors that involve voice interaction with computers. However, these devices are also delivering the low hanging fruit of benefits that many social robots sought to provide. This means social robots have to deliver clearly differentiated and meaningfully beneficial value beyond what smart speaker-based voice assistants offer today. Those use cases surely exist and we have seen several interesting robot applications in business settings. The unanswered question is what benefits will spur consumers to want and pay for social robots.

The post Jibo Shuts Down, Selling Off Robot Parts appeared first on Voicebot.